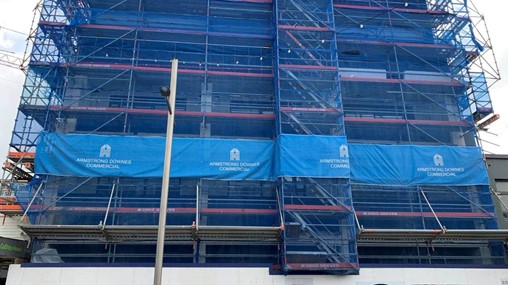 Wellington construction company Armstrong Downes Commercial (ADC) has gone into liquidation. David Ruscoe and Russell Moore from Grant Thornton New Zealand have been appointed liquidators. Two of the company’s largest construction projects were suffering substantial losses as a result of being fixed price in an economic environment of spiralling costs, procurement challenges, and labour shortages, the liquidators said in a statement. “Following an unsuccessful attempt at restructuring the company’s contracts, it has been decided the appointment of liquidators is in the best interests of customers, sub-contractors and other stakeholders to minimise further losses.” READ MORE: * Ebert Construction receivership comes up short; unsecured creditors owed $124m * Ebert contractors get some retention money after collapse, but not the full $9.3 million they're owed * Ebert Construction now has a liquidator - and he has directors in his sights It has eight construction projects in progress throughout Wellington. Armstrong Downes is the head contractor in most cases but does not directly employ any staff; its workforce is employed by other Armstrong Downes group companies. No other Armstrong Downes group companies are in liquidation. The liquidators have taken control of all ADC construction sites which have been closed for a limited period as they work through different options for each project. “These sites have been temporarily closed as it’s in the best interests of all stakeholders to protect both ADC and third-party assets, and to allow time to assess available options for each site going forward,” Ruscoe said. “It is important for sub-contractors to know we will be returning their assets as soon as practicable, and we will be working with employees from other Armstrong Group companies to facilitate this.” Grant Thornton would be contacting all customers and suppliers about its appointment in the next few days. Kevin Melville​, managing director of electrical and mechanical contractors NME, said Armstrong Downes was halfway through a development in Lower Hutt when it went into receivership at 7am on Monday. All the subcontractors were unpaid, he said. “It’s a terrible performance by them. I feel sorry for all the subbies.” Armstrong Downes had taken a $600,000 payment destined for the subcontractors two weeks ago, but an hour after it went through Melville said he was called to arrange a meeting. PwC had been acting for the contractors as a statutory manager, he said. Developer looks to rehire unpaid subcontractors Thames Pacific​ is the developer behind The Paddington terraced housing development on Taranaki St in Wellington, for which Armstrong Downes was the main builder for all three stages of the 151 unit development. Thames Pacific owner Stephen Sutorius​ said he was told by Armstrong Downes late last week that the company was in financial difficulty. “We offered them some further financial support to finish the job, which they declined,” Sutorius said. A notice was received from liquidators late last night, Sutorius said. “The liquidators have secured the site, meaning no access to the site for the subcontractors.” Stage one of the development, which has 39 dwellings within it, had been completed. Stage two, which has 42, was due to be finished this week, but is now fenced off. “It was really close to being finished,” Sutorius said. “We are obviously in quite a tough position at the moment as well, i.e. we have paid money to Armstrong Downes for their invoices last month which we have been told hasn’t been paid to the subcontractors.” Stage three, which had 70 dwellings within it, was roughly four months off completion. “The project itself is very financially sound, so it’ll be the case that the likelihood at the moment that we take over the build and complete the project ourselves,” Sutorius said. Sutorius said it was early in the process, but he hoped builders would be back on site within a couple of weeks, and he hoped to bring as many of the subcontractors back as possible. Sutorius said his company was close to $1.5 million out of pocket, and a number of subcontractors had been in contact looking for advice. “They are out of pocket, but from our side, we will get in touch with all of them, we’ve spoken to a lot of them already, and give them assurances we will make sure they get paid their invoices,” he said. “We will wear that extra cost to do so.” “You don’t take it on the chin lightly, but we have vested interests. A lot of these subcontractors have families, they have houses, and families to support and young kids to get through, so we need to make sure these guys get through it.” “Hopefully by us supporting them they will continue on the project with us.” The Paddington was Thames Pacific’s first contract with Armstrong Downes, Sutorius said. Sutorius said owners of the properties of The Paddington should expect a couple of weeks delay on build timelines, but the project was still sound. Whether you're investing, hiring, expanding, buying, financing, starting-up or diversifying, our business reporting helps you make smart, informed decisions. At heart, we're a big bunch of nerds. It's fun for us to analyse the markets, delve into data and check the trends for you. If our business reporting makes you feel educated and on top of the news, please contribute to Stuff today.