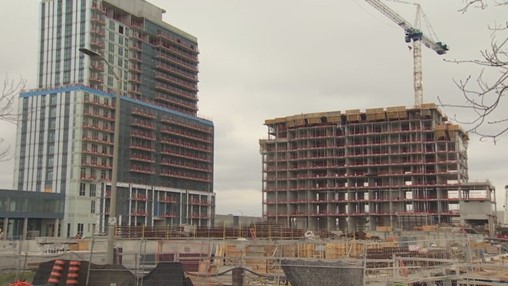 Strike could delay residential building projects in GTA, union says More than 15,000 construction workers walked off the job in Ontario on Sunday and their union says the strike could delay residential building projects in the Greater Toronto Area. The workers, members of Labourers' International Union of North America (LiUNA) Local 183, work in six sectors of the residential construction industry. They have rejected proposed settlements. "Fundamentally, it is about money," Jason Ottey, director of government relations and communications for LiUNA Local 183, told CBC Toronto on Monday. Those on strike include high-rise forming workers — who do structural concrete work on apartment buildings — self-levelling flooring workers, house framers and tile, railing, carpet and hardwood installers. The workers now off the job build high-rise and low-rise housing in the GTA. "Today, we have a shortage of housing and a critical shortage of people to build that housing," Ottey said. "Inflation is at an all time high and Canadians across the country are experiencing the challenges of dealing with the cost-of-living crisis that we're facing and our members are no different." The union wants the province's contractors' associations to return to the bargaining table with a wage package that reflects work done during the COVID-19 pandemic and addresses inflation, the cost of living and anticipated increases in inflation over the life of the contract being negotiated. The strike involves workers in the GTA, central Ontario, southern Ontario, and parts of southwestern and eastern Ontario. Ottey said the workers, deemed essential, continued to work throughout the COVID-19 pandemic when other sectors of the economy were shut down. "We didn't ask for pandemic pay, we do not have a work-from-home option, and as a result, we thought that our management partners would show their appreciation in this round of bargaining. And they haven't. They have fallen way short," he said. The strike action comes after collective agreements for 30 sectors, or trades, of the residential construction industry expired on Saturday. 'Delays disrupt scheduling,' employer says According to the Residential Construction Council of Ontario (RESCON), about 20 sectors have reached an agreement and about four are continuing to bargain, have gone to arbitration, or have reached a tentative agreement and await a ratification vote. Andrew Pariser, vice-president of RESCON, said on Monday it's common for a "pattern" to emerge in compensation when a large number of collective agreements expire on the same day. He said a pattern has been established in this round of bargaining and RESCON is confused by the union's position because proposed settlements that were rejected fall within the established pattern. "We're hopeful still that the parties can get back to the table, or agree to arbitration, or agree to resolve these disputes without lengthy strikes. Then we can get back to building the houses that everyone in Ontario needs," Pariser said. In an email on Monday, Pariser said the impact of the strike will depend on the stage of construction of a project. Those at the framing or high-rise forming stage will be affected more, he said. "Generally speaking, delays disrupt scheduling, delay closings, and increase costs," he said. "They add strain to schedules, the supply chain and are very disruptive to the construction of the residential housing units we need to build for all Ontarians. The costs will vary from unit to unit depending on the stage of construction and length of delay." Province urges parties to resolve issues through talks Under the Ontario Labour Relations Act, strikes in the residential construction sector in the province can start on May 1 every three years but must end by June 15. Any outstanding disputes are then settled through arbitration. Ontario's ministry of labour said in a statement on Monday that its mediators have been involved with both sides and are available to help at the bargaining table. "We encourage the employers and the unions to make every effort to resolve their differences at the bargaining table. We are confident that by working together, the parties can reach a settlement," the ministry said in the statement. With files from Alison Chiasson